In 2007, Tommy entered the band and gave something more to compositions of the three other members. In this year, the group was continually progressing and brought out their first EP "Dive with us". It was a rotten live recording which is nevertheless nice for a beginner band. In 2008 and 2009, the group composed and recorded to find the key that will permit to climb up the ladder. The year of 2010 began with the semi final of the "Class Eurock" contest where The Strange was on stage at the "Espace 3000" in Hy?res. In May 2011, they recorded their last song called "Feeling the Death on the Hill of Love" thanks to the "Aixqui?" association. On the 21st of June the band played live for the Class`Eurock 2011`s final, which had taken place in Aix-en-Provence, and won a musical experience of 9 days in Rotterdam (Holland). There, the group played at the "Westerpop Festival" in Delft with Holland`s typical weather: the rain! In the end of 2011, The Strange brought out a free EP made up of 3 titles, which is available upon request. 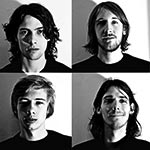 Feeling The Death On The Hill Of